Skip to content
We live in a digital age… why do I need prints?

We live in a digital age… why do I need prints?

On my desk is a photo in a frame.

It’s not a particularly overwhelming piece of art. It’s a nice photo of a cat. My cat, in fact, whom I had when I was a child. His name was Fred, and he resembled Horse from Footrot Flats in personality. He had all the dogs under control, and sauntered around the farm with a nonchalant air like it was his own personal kingdom. Which it was.

I took this photo on the 1stof February, 1982. I know this, because it is written on the back. Along with the words “My first photo,” in not-too-messy round letters of a child under 10 years old. As an added touch, in the cupboard behind me I have the camera it was taken with: a Pentax K1000, still in perfect working order.

I have this photo because it comes from an age when we printed our photos. We bought our rolls of 24 or 36 exposure film, with its set ISO rating. We thought ahead “I think it will be sunny when I use this, so I’ll get 100 ISO”, and adjusted our shutter speed and aperture accordingly. We took our photos and dropped them into the chemist or Kodak. A week or so later, we would pick them up with that warm feeling of anticipation: what worked, what didn’t. Who blinked, who looked away, who pulled a funny face. And occasionally, who stole my camera and took THIS photo?

Ask people what they would save from their burning house and, assuming the people and the pets are out safely, most people will say the photos.

They cannot be replaced.

Think back to your own family photos. Depending upon which generation you fall into, you’ve probably sat on the couch at some stage with an older member of your family, leafing through an album, or sorting through a box of photos. You might have laughed, cried, pondered…. “Remember that day?”, “Oh, that was when…”, “Who is that…?”

Look at the photos we have from events of the past, whether they be at an international, or simply family level. We only have those images because someone printed them. Someone made them into a tangible, hard copy of the event, or person, or scene, that would eventually cease to exist if not for the photos to keep it in our minds.

If we only have digital files, what will happen to them in the future?

Do you remember when computers first came out, and we used 5¼ and 3 ½ inch floppy disks?

They had a storage capacity of around 180KB and up to a whopping 720KB. We then moved to CD ROMs, Zip drives, DVDs, and USBs.

Do you still have a computer that will read a floppy disk? Or even a CD/DVD? If not, what will happen to those irreplaceable photos stored on those old CDs? How will you sit on the couch with your own younger generations and reminisce through those memories? 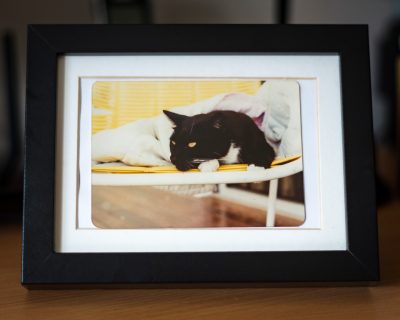 For this reason, I offer prints, albums, and wall art, as my first and foremost products.

I offer these products in archival quality, using inks and media that will exist for generations.

I offer you the things that will last.

These photos will still be there. Long after the initial investment is made.

Still reminding you of the day, the dog, the cat (!), the person, the memory.

Whatever was important to you at that time.

How many other things, that you have bought in the past, can do that?